Amish clothing provides the plain people with an instant means of separation from the world. From the way Amish dress, you can tell at a glance that they are Amish.

Jakob Ammann, the father of the Amish movement, was a tailor by trade. He observed first hand the influence that clothing had on people. Dress identified a person's station in life. He saw that success and individual accomplishment were proclaimed by personal appearance.

Ammann's religion is based upon separation from all that is worldly. So it is only natural that he recognized the need for Amish clothing to be simple and non-conforming to the world. 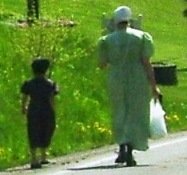 The Amish uniform would symbolize their separation from the world.

In the 1690's when Jakob Ammann split from the Mennonites, most of his followers were small farmers that leased their land from large landowners. So the early Amish dress was simple and functional. The Ordnung, which is the Amish culture's unwritten guideline for living, stressed a very definite dress code of simple clothing that did not conform to the world.

In the 1730's the Amish began migrating to America along with Mennonites and other groups in search of religious freedom. Along with this freedom came the right to own land. The Amish work ethic, frugality, and farming skills blossomed in this environment and they prospered.

Through the years the Amish have continued to prosper and thrive. They have steadfastly continued their tradition of distinctive Amish Clothes. This has helped them maintain their identity in the ever-changing modern world.

Today in the huge Amish settlements in Pennsylvania, Ohio and Indiana, affordable farmland has become scarce. This is forcing the Amish men to find other means of making a living. Factory and construction jobs have forced the Amish to work among outsiders. Amish girls work in restaurants and retail stores. These exposures to the outside world pose a threat to their culture and way of life.

Their Amish dress is a means of separating themselves from the outside world in which they now must work. Amish clothes are considered to be an expression of:

Since they do not conform with the world, the Amish must conform with the society in which they live. Plain and simple clothing is a badge of solidarity. When everyone conforms to standard of dress, emphasis is placed on the group instead of the individual. It is a sign of unity.

Most things in the Amish tradition are designed to hold the Church together. The Amish believe that clothing should not be used to distinguish the individual from the group by making that person more "attractive" over others. The person who places emphasis on the individual is much harder to control and more likely to stray from the group. The whole Amish culture is based on placing group over the individual.

It is remarkable that today, Amish clothes remain very consistent across 1700+ local congregations, even though the churches are not connected by any central governing body.

Every year each congregation independently reviews its Ordnung, the unwritten guideline to living Amish. It covers every facet of Amish life including each congregation's Amish dress code. Still, in any community where they are present their appearance makes it is easy to identify the Amish.

Amish attire has an effect on us outsiders too. In today's fast paced world, the thought of a culture that isn't caught up in the rush to personal growth and individual accomplishment is appealing. Whether it is true or not, admirers attribute this trait to the Amish culture. Amish clothes evoke this attitude.

For example, Old Order Mennonites have most of the same conservative beliefs that make the Amish lifestyle so appealing to many outsiders. 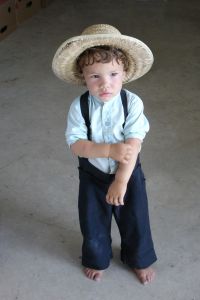 Mennonite women might wear dresses made from small print material and  though they wear head coverings, they still paint a picture of modern culture when compared to the Amish women in their plain dark homemade Amish attire.

You can test this effect yourself. When you see a small Amish child dressed in miniature adult Amish clothing how do you react? How do the other people around you react to this child? You pass cute kids everyday with maybe a brief smiling glance. But these Amish kids stir a sentimental emotion. Many people react as if they are looking at a living museum piece from our simpler, more peaceful past.

Wearing separate Amish clothing serves an additional purpose of indoctrinating children into the Amish community. When children are dressed like their parents it reinforces the fact that they are different and separate from the outside world. They "feel" Amish. This early influence undoubtedly contributes to the fact that nearly 85 percent of Amish children grow up and join the church.

Amish clothing is a cornerstone of the Amish identity. Jakob Ammann was right. It is one of the glues that holds the Amish culture together and keeps it strong.